True Love is a 67′ schooner located at the Seneca Harbor Park Pier in Watkins Glen, New York. We as owners, along with our exceptional crew, take great pride in keeping TRUE LOVE in pristine shape. We have sacrificed many hours making sure she is ship-shape and looking “Yar” for her passengers.

After a long and proud history, the True Love schooner offers incredible experiences right here in the Finger Lakes. From public sails and private charters to corporate events and the celebration of life’s precious moments, True Love is ready to welcome you aboard.

In 1926 John G. Alden, who was born in Troy, NY, designed and built the Malabar VII, the seventh vessel designed by Alden in a series of thirteen racing sailboats, known as the Malabars.

Many of these sisters went on to win some of the world’s most prestigious and difficult sailing races, such as the Newport to Bermuda Race, and the San Francisco Class Championships.

In fact, Alden designed the Malabar VII for the sole purpose of creating a sailboat that would claim first place in the 1926 Newport to Bermuda race; and the Malabar VII accomplished just that. 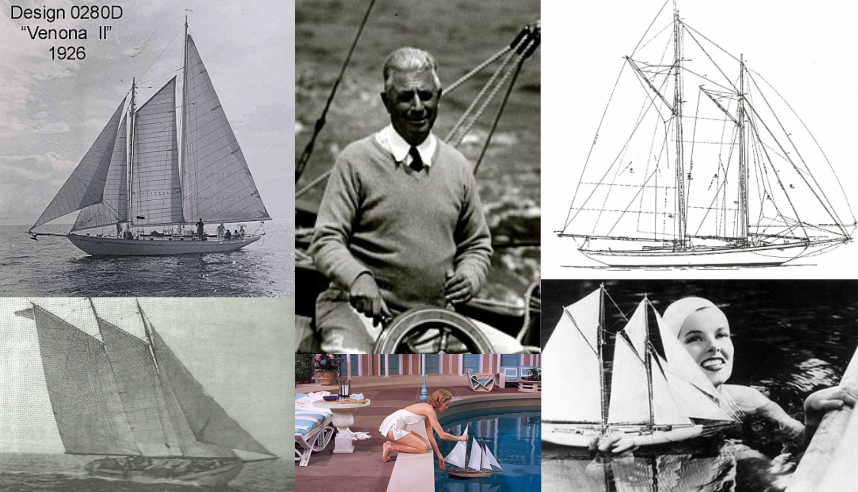 The Malabar VII design varied from its predecessors by incorporating three more sails, adding about seventy square feet more of sail, making it one of the strongest racing boats in the late 1920s.

Commissioned in 1925 by Elmer J. Bliss, Venona II (TRUE LOVE) was built in 1926 in Wiscasset, Maine by Pendleton Brothers Shipyard. After Venona II’s sister ships gained notoriety for their sailing records, Venona II was eventually renamed True Love, among other names and went on to make a reputation as a movie star.

True Love made her movie debut in the 1940 romantic comedy, The Philadelphia Story, where she appeared as miniature model of herself. This movie would go onto produce, perhaps one of the most famous sayings in modern sailing; when Katharine Hepburn said, “My, she was yar.”

There is the famous scene where Bing Crosby serenades Grace Kelly with the song “True Love,” composed by Cole Porter, while onboard True Love.

After her movie career, True Love retired to St. Thomas where she sailed for well over half her life. In 2003 she was completely restored by David Call and his crew of craftsmen to the beauty and sophistication she represents today.

In 2008 she was purchased by Schooner Excursions Inc. and made the long journey north to her current home at the Seneca Harbor Park Pier in Watkins Glen; the heart of the Finger Lakes region. This trip north entailed thousands of miles of offshore sailing, and hundreds more miles up rivers and through canal systems where her masts were stepped, or removed, enabling her to travel through narrow passage ways and underneath bridges. She was named Malabar VII for a very brief period of time before officially returning to her proper name True Love after her re-christening in the summer of 2010.

In 2021, True Love was acquired by Seneca Sailing Adventures, LLC and will continue to offer memorable excursions for its guests.

True Love is not only a symbol of American sailing history and American naval architecture, but also a representation of the love of generations past, present, and future. Those who set sail with this truly majestic boat on the waters of Seneca Lake will feel as if they have fallen in love all over again.